Your model in this school is St. Aloysius Gonzaga after whom the School is named.  This 16th century prince, heir to the throne of the Marquisate of Gonzaga in Italy and at his disposal everything he could have desired in life.

But inspired by a deep spirit of faith and moved by a deep love for his fellowmen, at the age of 18 he abdicated his rights and entered the Jesuit Order, founded by St. Ignatius of Loyola, to be a religious priest whose wealth would be god alone and whose happiness would be the service of others.

While Aloysius was still in training there was a plague in Rome. Victims of the plague had no hopes of recovery and were

being abandoned everywhere for fear of contagion. The youthful Aloysius who was then 24 rose up to the occasion with his companions and immediately set about caring for the sick and the dying, risking his own life.

The risk, however, was too great; Aloysius became a victim of the disease and died in the midst of his noble work, offering his life as a sacrifice for others. 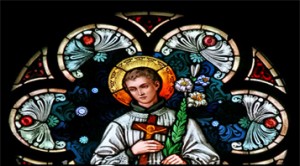